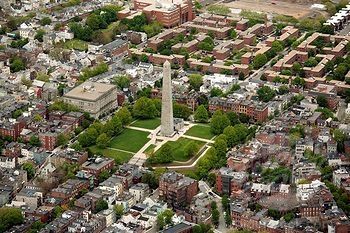 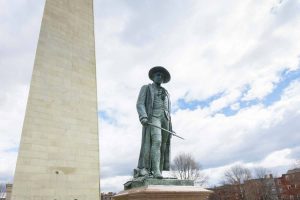 On June 17, the people of Massachusetts celebrate Bunker Hill day, on the anniversary of the Battle of Bunker Hill that happened on June 17 of 1775, during the American Revolutionary War. Celebrations are held both on June 17, and on the Sunday before it.

Although Bunker Hill Day used to be a state holiday, it is now only an observance, so businesses and schools remain open.

History
At the start of the American Revolutionary War, and after sieging Boston, colonial militia leaders learned about the British’s intentions of sending their troops from Boston to take over and fortify the hills that surrounded the city, especially Bunker Hill which was located on the Charlestown Peninsula. On June 16, a group of around 1,000 American troops occupied Breed’s Hill during the night and built a small fort on top of the hill that overlooked Boston, and smaller fortifications around the Charlestown Peninsula.

On the morning of June 17, the British were made aware that the American troops had taken over the hill and decided to attack them on that day. As the army of 2,200 British soldiers advanced, the colonial soldiers were told not to fire at them until they were very close. As soon as the British were a few yards away from the American fortifications, they were met with heavy fire and had to retreat. Forced to re-group, they staged another attack but were met with the same hostility. However, on a third attack by the British, Americans, low on ammunition and outnumbered, had to fight the invaders off in hand-to-hand combat. Their severe disadvantage forced them to retreat to Cambridge, and the British took over Bunker Hill.

However, although they were defeated, the colonial untrained militias still managed to make a big dent in the British Army. This was a great morale booster for American troops and made them realize that dedication and patriotism would help them defeat the British and gain independence from their rule. At the same time, the British realized that this would be a longer war than they expected, and were discouraged from carrying out more unplanned attacks.

Bunker Hill Day Celebrations
In Charlestown, there is a big parade held to commemorate Bunker Hill Day. The parade is made of marching bands, troops from the American military, the police and fire departments, sports teams, and historical re-enactment groups, all carried on decorated floats.

Many people visit historic sites, such as Bunker Hill, to watch re-enactments of the battle and the siege of Boston, demonstrations about the colonial lifestyle, and live music.

Between 1825 and 1843 the Bunker Hill Monument was erected in Charlestown, making it one of the first monuments built in the United States. The monument stands on Breed’s Hill, where most of the fighting took place and is a granite obelisk that stands and 221-feet tall.